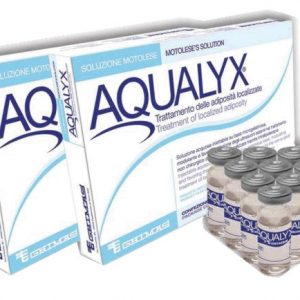 Is a microgelatinous solution containing micro quantities of molecules with an adipocitolytic action (derived from the sodium deoxycholate) with a shorth half life capable of modulating and intensifying the effect on adipose tissue through the external application of medium frequency ultrasound . Aqualyx must be used by a trained physician who has been trained to perform the procedure and must be combined with sonolyx.

Aqualyx is a phosphatidylcholine free solution, in which the principal agent which leads to the destruction of the fat cells is a detergent (weakened sodium deoxycholate). The detergent dissloves the fat by mean of emulsification of the adipose cell membrane. Aqualyx thanks to its easy transdermal delivery with sonolyx, provokes cellular lysis releasing cellular debris and triglycerides which are progessively disposed of by the monocyte-macrophage system and drain into the lymphatic system. Unlike solution of phosphatidylcholine aqualyx is :